During the 2008-2009 school year I played wallyball often with my homeschooling friends.  About every other week we would play after classes on fridays.  The sport is extremely fun. It is played almost exactly like volleyball, except the court is surrounded by four walls that the ball can be bounced off of. It is definitely one of my favorite group sports to play.  Admittedly, I wasn’t not all that good at it, but we all just played to have fun 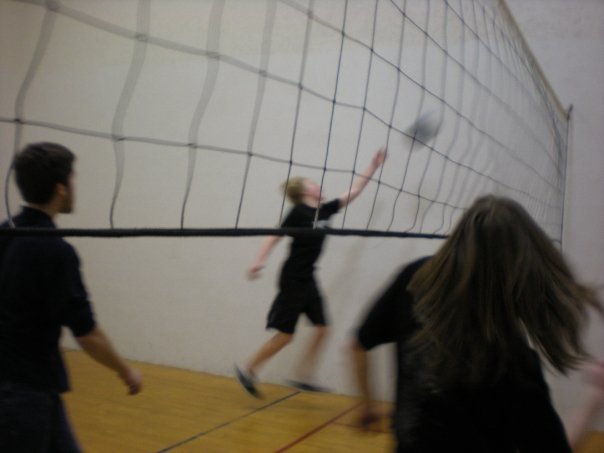 We stopped playing regularly after my freshman year, and I always missed it after that. In the fall of 2011 I decided to give volleyball a try and enrolled in a class at Oakland Community College.  I had a lot of fun taking the tennis class the semester before, so I thought I would try taking a course in another sport I missed playing. I went in a total novice and learned a ton by the end of the class. I went from not knowing what a “bump” or a “set” even meant to playing positions and calling out plays. We played in a  five player team rotation and I was able to gains skills in serving, digging, setting, blocking, and spiking. I enjoyed the class so much that I plan on joining the volleyball club at Quest when I go to college.