I participated in the OHG Music Club during my four years of high school.  It had a handful of high schoolers in it, and we met for an hour on a biweekly basis.  During the meetings we would play music for each other and also work on playing music together as a group.  My dad, Jim Bizer, coordinated the group and arranged pieces of music for us to play together.  Throughout the four years we had an interesting array of instruments that members played: acoustic guitar, electric guitar, bass guitar, piano, mandolin, ukulele, violin, cello, accordion, clarinet, banjo, and our voices!  I played both electric and acoustic guitar with the group.

I loved playing music with the OHG Music Club because it opened up a lot of opportunities to perform music in ways and situations that I wouldn’t have had otherwise.  I had never played music with in a group before joining this group and that alone was an entirely new and incredibly fun dynamic of playing music that I had never experienced.  Participating in the OHG Music Club also gave me more opportunities to perform for an audience.  In 2009 we put together a small concert community service project and performed it at an assisted living center. The people there loved having an activity that was not part of the typical daily routine. 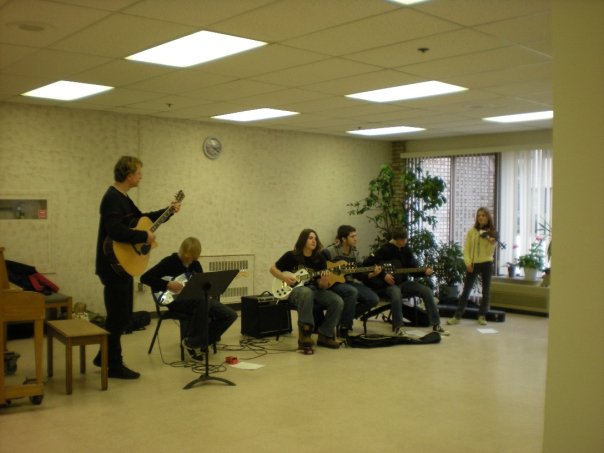 Concert at an assisted living center

The group also performed at OHG talent shows, OHG graduation ceremonies, and for the annual OHG spring maypole dances where we would play traditional irish music.

Below is a video of the group performing a vocal arrangement a capella for the 2012 OHG graduation.